Coronavirus pandemic: Latest news from across the world 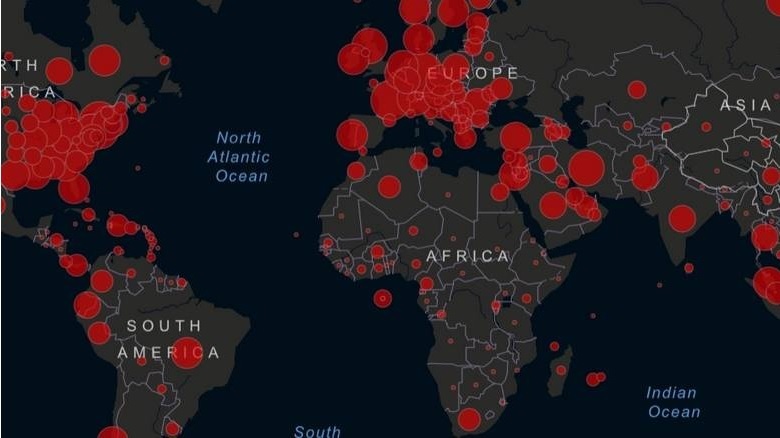 “In the next few days, we will reach one million confirmed cases and 50,000 deaths,” WHO said.

The World Health Organization (WHO) voiced deep concern about the rapid escalation and global spread of the coronavirus.

“In the next few days, we will reach 1 million confirmed cases and 50,000 deaths worldwide,” WHO Director-General Tedros Adhanom Ghebreyesus said.

84,328 new cases of Covid-19 and 4,846 deaths were reported in the previous day.  Though the outbreak started in China, it has now reached 206 countries and territories. 140 of those have reported fatalities. Senegal, Isle of Man, Republic of the Congo and Antigua and Barbuda reported their first fatalities in the past day.

Post-coronavirus world will be even more digital: Guterres

The post-coronavirus world will be different and much more digital than before, said UN Secretary-General Antonio Guterres.

“One thing that’s clear is that we’re seeing the mass digitalization of human relations with the crisis, and that will have an inevitable impact,” Guterres told Efe news in a telephonic interview.

The flip side, he cautioned, was that there would be a much greater need to create “regulation and other mechanisms so all that development of the digital world is done for the benefit of humanity and that the risks that exist, and are well known, can be avoided”.

Another impact of the fight against the coronavirus, at least in the short term, is a reduction in greenhouse gas emissions resulting from the confinement measures and the abrupt halt to economic activity in many parts of the globe.

In that regard, Guterres said the world must “use this opportunity to provide a very strong push towards sustainable development” and towards meeting the established climate targets, although he stressed that no virus can solve the climate crisis.

British consumers will receive a three-month freeze on loan and credit card payments to weather the coronavirus epidemic, under plans outlined by the country’s financial regulator.

The “stop-gap” package complements relief measures already announced by the government to support mortgage-holders, furloughed staff, renters and the self-employed. It includes pledges to slash interest rates on arranged overdrafts up to 500 pounds to zero, for up to three months.

The Financial Conduct Authority said it was conducting a brief public consultation until next Monday, and the measures would be expected to come into force by April 9. It will make a further announcement about the measures next week.

Spain on Thursday set a record in virus-related fatalities, with 950 deaths in 24 hours, even as its infection rate appeared to ease.

New coronavirus infections rose nearly 8 per cent overnight to 110,238, placing Spain close to Italy, the country that so far has the worst outbreak in Europe.

Health authorities say contagion in Spain has dropped from a daily average of 20 per cent until March 25 to less than 12 per cent after that date, more than 10 days after Spaniards were ordered to stay home.

Zoom’s daily users ballooned to more than 200 million in March from a previous maximum total of 10 million, the video conferencing app’s boss Eric Yuan said on Wednesday, as it fought to dispel concerns over privacy and “Zoombombing”.

The use of Zoom and other digital communications have soared with political parties, corporate offices, school districts, organisations and millions across the world working from home after lockdowns were enforced to slow the spread of the coronavirus.

The founder and chief executive officer Eric Yuan said that Zoom usage has taken off over the last few weeks, with more than 90,000 schools across 20 countries, using its video conferencing services to conduct classes remotely.

Testing was the solution to “unlock the puzzle” of the novel coronavirus, said the UK Prime Minister Boris Johnson, who was currently in self-isolation after contracting the disease which has infected 29,865 people and killed 2,357 others in the country.

Designer Luggage, Backpacks + Accessories so you can #livelight

Are You Searching for Medical Equipment on Rent?

Get Hospital Patient Lifts Rental In The UAE