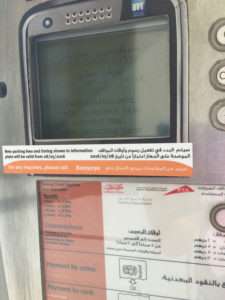 New labels placed on parking fees machines confirm that new fees and timings will come into effect from May 28.

Dubai issued a resolution on public parking services in March that revealed new tariff rates for parking on street will be Dhs2 for 30 minutes, Dhs4 for one hour, Dhs8 for two hours, Dhs12 for three hours and Dhs16 for four hours.

The new rates for public car parks are Dhs3 for one hour, Dhs6 for two hours, Dhs8 for three hours, Dhs12 for four hours, Dhs15 for five hours and Dhs20 for 24 hours.

The previous tariff rates were Dhs2 for one hour, Dhs5 for two hours, Dhs8 for three hours and Dhs11 for four hours.

According to the resolution, the parking tariff is applicable from 8am to 10pm on working days.

The new tariff will not apply on Fridays and public holidays.

Looking to construct an app like Uber? What is the cost of an app?

Send Sweets with Rakhi for Brother in UK Free Shipping