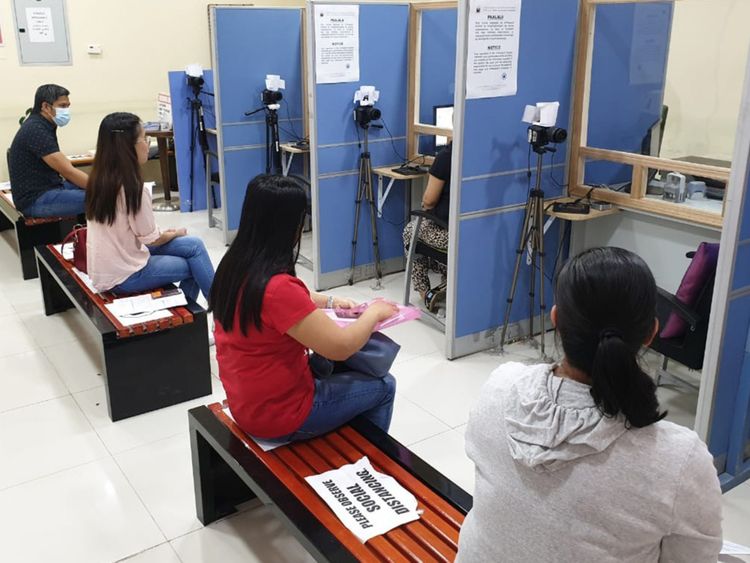 Minimum Dh10,000 income must for a Filipino in UAE to sponsor a family member’s visit.

Filipinos in the UAE are concerned after the minimum salary required to acquire an Affidavit of Support and Guarantee (AoS), an attested letter issued to Filipino tourists as a proof, was raised from Dh3,500 to Dh10,000 with effect from August 24. Photo for illustrative purpose only.

Dubai/ Abu Dhabi: Filipino expats have expressed their concerns after the salary threshold for securing a supplementary travel document mandated by Philippines Immigration for a Filipino to bring a family member over to the UAE has been revised.

The minimum salary required to acquire an Affidavit of Support and Guarantee (AoS), an attested letter issued to Filipino tourists as a proof that they have the support of their family during their stay in the UAE, was raised from Dh3,500 to Dh10,000 with effect from August 24, 2020.

The AoS is presented to Philippines immigration officials before travellers can fly to the UAE. It is, however, not required by UAE immigration authorities upon entry to the country.

The Philippines missions in the UAE announced the new requirements for AoS on their website.

Gulf News had reached out to the Philippines Embassy in Abu Dhabi and the Philippines Consulate in Dubai for more clarifications, but did not get comments on the revised rule.

According to the revised policy, a Filipino residing in the UAE can execute an affidavit to sponsor a relative only within the first and second degree of consanguinity or affinity.

Aside from the proof of relationship, an expat who is single must show proof of having a Dh10,000 monthly income before he or she can sponsor a relative to visit the UAE.

The AoS stipulates that a Filipino sponsor is “gainfully employed or engaged in business” and holder of a valid UAE residence visa.

Other documentary requirements include sponsor’s employment contract duly issued by the Ministry of Human Resources and Emiratisation or employment contract verified by the Philippines Overseas Labour Office showing monthly income and salary pay slip issued during the last six months.

The Filipino sponsor should also submit a tenancy contract from the municipality under his/her name; or if tenancy contract is not under the name of the sponsor, a hotel booking duly stamped by the hotel or travel agency is needed.

The document was introduced in 2002 by Philippines authorities to curb human trafficking. But it has been removed and reinstated several times following allegations of falsification and redundancy.

As per the AoS, a Filipino expat who is planning to bring a family member to the UAE is tendering a “guarantee that (he/she) shall provide all financial support to pay for the food, accommodation and travel, including airfare for the return journey, medication and hospitalisation and other expenses, debts and obligations incurred including but not limited to immigration fines and penalties of the (visitor).”

Moreover, the AoS is a “guarantee that the (visitor) is visiting the UAE entirely for tourism and recreational purposes and is not visiting the UAE for (1) employment (2) seek employment (3) to transit via the UAE to another country where deployment of Filipino nationals is restricted or where deployment requires clearance or endorsement of relevant government departments and agencies in the Philippines.”

According to Sid Rivera, marketing manager at Al Qadi Tourism in Dubai, Philippines immigration officials routinely check the AoS of anyone travelling to the UAE. “But based on our experience, if you travel with a family member who is a UAE resident or you travel as a family, you need not show the AoS, which would cost the sponsor around Dh100,” he noted.

Rivera said they facilitate tourist visas for those who don’t have relatives in the UAE and those who earn less than Dh10,000. “Visitors like doctors and lawyers can travel even without AoS,” he added.

Speaking to Gulf News, Barney Almazar, director at the corporate-commercial department of Gulf Law and an expert on Filipino migration, said that “the AoS is an infringement on a Filipino’s right to travel”.

“The only valid requirements to travel outside Philippines are passport and visa. It is up to the host country if they need proof that you have capacity to travel — like the United States does, which is very strict when it comes to issuing a visa,” Almazar pointed out.

“The salary requirement is very high and not many Filipinos will qualify for the threshold,” said Malou, adding: “But I also understand why our officials implemented it (AoS). Some Filipinos come here not for tourism, but to look for jobs and if they fail to find one, they would end up being stranded and it would become the responsibility of the Philippines government to bring them home.

“But my business will definitely be affected as 90 per cent of my clients are Filipinos. So, I hope it (AoS) will be removed,” she added.

Meanwhile, Filipino expat Carlo Santos, who works as an office clerk, said: “Based on my salary, which is Dh5,000, I’m qualified to sponsor my wife who is in the Philippines, but the stipulation for AoS has now made it difficult for me to bring her over.”

Buy The Best Bipap Machine In The UAE

book a hotel room for a few hours