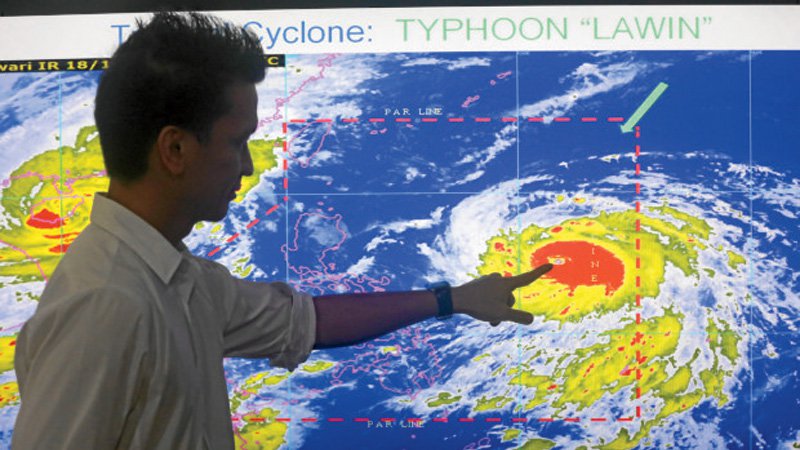 A weather forecaster points to the location of typhoon Lawin during a press briefing at the weather bureau PAGASA on Tuesday, October 18, 2016. INQUIRER PHOTO / GRIG C. MONTEGRANDE

At 4 p.m. on Tuesday, Typhoon “Lawin” was located 930 kilometers east of Tayabas, Quezon province, with sustained winds of up to 185 kilometers per hour near the center and gustiness of up to 230 kph. Internationally known as “Haima,” the howler was forecast to move west northwest at 25 kph.

The Philippine Atmospheric, Geophysical and Astronomical Services Administration (Pagasa) advised the public to start hunkering down for Lawin, which is expected to strike the Cagayan region early Thursday, and possibly become a supertyphoon that could cause heavy damage. Strong winds were expected to lash the area beginning Wednesday.

Pagasa is expected to raise Signal No. 4 or 5 on Wednesday evening in Cagayan, Apayao, Ilocos Norte, and northern Isabela, which means maximum sustained winds of up to 220 kph in the area, and gustiness of up to 300 kph “or more” within 36 hours.

Storm surges of up to 5 meters are expected to rake the coasts of Cagayan, the Calayan Group of Islands, Isabela and Ilocos Norte.

In a press briefing, NDRRMC Executive Director Ricardo Jalad warned residents in low-lying areas against the possibility of landslides and flash floods, as well as storm surges for those living along coasts.

“We will exert all our best effort to anticipate the damage and make the necessary preparation and measures,” Jalad said.

Jalad said some 6,000 people who evacuated last week due to storm “Karen” (international name: Sarika) will remain in evacuation centers.

The interior department identified the provinces of Abra, Apayao, Cagayan, Ifugao, Ilocos Norte, Ilocos Sur, Isabela and Kalinga as being under at risk from heavy to intense rains, with 10 to 20 millimeters of rain per hour. The eight provinces are within the 150-km radius of the typhoon’s forecast track.

The social welfare department said P43 million worth of food and nonfood items had been stockpiled in warehouses in the Ilocos, Cagayan Valley, Cordillera and Central Luzon regions for the emergency.—WITH REPORTS FROM DONA Z. PAZZIBUGAN, MELVIN GASCON, TONETTE OREJAS, YOLANDA SOTELO AND GABRIEL CARDINOZA

IT Service Provider in Dubai

Swift IT – IT Services and Solutions in Abu Dhabi

Are You Looking For Used Durable Medical Equipment In The UAE?

Buy Foot and Ankle Brace in Dubai at a Low Price