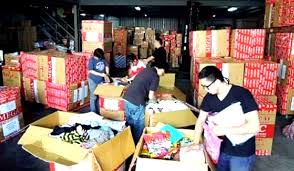 Dubai: The word “Balikbayan box” — homecoming goodies in a box — is synonymous to overseas Filipinos, who number about 10 million (out of a population of about 100 million).

But tighter rules imposed by the Philippine Customs Bureau in August on those boxes of goodies have become a hot-button issue, that Customs officials were forced to backtrack on a rule earlier this week, Philippine media reported.

With Christmas just less than 80 days away, easing on Balikbayan box rules is good news for Filipino expats and their relatives at home.

But for OFWs, it’s just a temporary relief.

The BOC earlier said that the new regulations are aimed to promote transparency, curb alleged smuggling and tax-dodging by overseas Filipino workers.

Philippine Bureau of Customs memorandum order 04-2017, which took effect August 1, 2017, requires senders of Balikbayan boxes containing personal effects and household items to declare everything inside the box — including used shirts, clothes, shoes down to the last pair of socks — in order to avoid taxes.

Under the suspended rules, three measures were introduced: (a) Senders must fill up an information sheet, (b) submit a photocopy of their Philippine passport and (b) submit purchase invoices of goods to be shipped.

“If the boxes are really itemized, it’s like you have written, ‘Open me, I’m yours.’ I concede that there must be rules, but not so complicated that the box ends up being wrapped in red tape,” Recto was quoted by Philippine media as saying.

Under the now-scrapped rules, every OFW sending boxes home with brand-new items — shoes, bags or clothes — are required to also provide the necessary receipts as proof of purchase.

Shipments that fail to comply with the requirements may be subjected to physical examination and extra charges.

Filipino expat cargoes that don’t contain goods in commercial quantities are normally exempt from duties and taxes, and they don’t usually undergo such meticulous screening processes.

In 2016, a set of guidelines was announced that effectively increased the duty-and tax-free ceiling for balikbayan boxes to P150,000 (approximately Dh10,800).

The BOC’s order also stipulated that the package should be adressed to a family member or relative of the sender.

“If the box is addressed to a girlfriend, friend or boyfriend, the balikbayan box tax-free privilege will not apply,” an official said in Filipino.

Overseas Filipinos take months to fill up a balikbayan box — as they wait for sales. Most shipments take place in the run-up to Christmas or before graduations.

The low-down on Balikbayan boxes law:

Amid public outcry against stricter rules on ‘Balikbayan boxes’, the new chief Bureau of Customs ordered a review of the rules and put on hold Customs Administrative Order (CAO) No. 5-2016 and CAO No. 04-2017.

CAO No. 5-2016 tightened controls on balikbayan boxes, while CAO No. 04-2017 aligned balikbayan privileges with RA 10683, also known as the Customs Modernization and Tariff Act (CMTA).

Section 800 (g) of the CMTA allows OFWs and other Filipinos abroad to send tax-free balikbayan boxes in the Philippines as long as its contents are not intended for barter and sale, and are not worth more than P150,000

Some lawmakers, including Senator Ralph Recto, saw the now-suspended guidelines as overly bureaucratic and a wrong interpretation of the law.

Under CMTA, an OFW can send home, tax- and duty-free, a balikbayan box valued not more than P150,000 three times a year.

Senator Recto said the previous BOC management “wrongfully read the cap on the privilege as P150,000 a year, when that amount is per shipment, which can be availed of three times annually”

One provision in the CMTA has a bearing on the Marawi crisis, the typhoons and the Filipinos’ misfortune of being at the receiving end of calamities — man-made and natural

Recto said Section 120 of the CMTA deals with “relief consignment” or goods such as food, medicine, equipment, shelter materials for free distribution to or use of victims of calamities

Under the law, “clearance of relief consignment shall be a matter of priority and subject to a simplified customs procedure”

“These shipments must be cleared beyond the designated office and shall be waived of corresponding charges. The examinations of goods are allowed only in exceptional circumstances,” said Senator Recto.