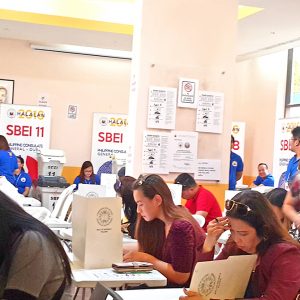 DUBAI – An official from the Philippine Embassy in the capital is urging Filipinos in the country to register early for the May 2019 midterm elections at their respective embassy or consulate.

Unregistered voters need to appear personally to capture their biometric data, including facial features, fingerprints and signatures, before being digitally recorded.

With almost two years of registration, according to Vice Consul Ryan Pangwi, the embassy in the capital is getting more applicants for the past couple of weeks.

“Ang applicants namin would be around [cut above average] 90 to 100 per day,” he told Kabayan Weekly.

He noted that Filipinos in Abu Dhabi are becoming more aware of the ongoing registration.

Asked how long the process takes, he said that it will be seven minutes at the actual process.

Filling out the overseas voting (OV) form will take at least three minutes.

If one is unsure if he is already a registered overseas voter or not, he can ask the personnel of the embassy or consulate to verify his name from the list.

One should bring his passport to prove that he is a Filipino citizen. The next thing that he will do is accomplish the OV form, submit or furnish supporting documents (valid passport) with the OV form, and submit to a biometrics capture.

An applicant doesn’t need to submit the requirements and have biometrics data on separate days because, according to Pangwi, the process itself is very quick.

Meanwhile, in a statement sent to Kabayan Weekly by the Department of Foreign Affairs – Overseas Voting Secretariat (DFA-OVS) recently, it said that they have set a new record for its first quarter performance, garnering a total of 67,497 new OV registrants for the 2019 midterm elections.

“This new milestone can be mostly attributed to the hard-work and dedication of the men and women of our Foreign Service who are aggressively campaigning to encourage more overseas Filipino to participate in this ongoing electoral exercise,” Undersecretary Ariel Abadilla, DFA-OVS chairman, said.

With this growing numbers of registrants, Pangwi still urges Filipinos across the UAE to register early and not wait for the “last minute.”

“It is our right and duty as Filipino citizens to actually involve [ourselves] in the electoral process.

“It is one of the most important rights na pinaglaban ng ating mga ninuno.

“And we should not waste that opportunity,” he said.

He noted that laws are created by the Philippine’s senators and representatives, hence, it is very important to take part on this.

All citizens of the Philippines abroad who are at least 18 years of age on May 13, 2019 and is not registered as an overseas voter are qualified for the overseas voting registration.

Interior Designer Dubai – We Design for Well Being

Are You Looking For A Used Weighing Machine Online?

Improve Your Mobility With Foot Ankle Support In Dubai

BestbuyEreviews is a product review company with just one mission