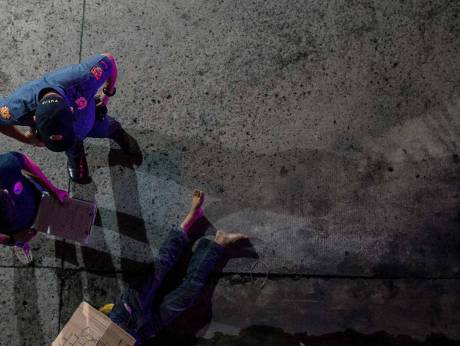 Police have confirmed killing more than 110 suspects since Duterte won elections in May.

Police have confirmed killing more than 110 suspects since Duterte won elections in May promising a law-and-order crackdown that would claim thousands of lives and fill funeral parlours.

As the official death toll has mounted, and other bodies not confirmed killed by police have been found with placards declaring them drug traffickers, human rights lawyers and some lawmakers have expressed deep concerns about the war on crime spiralling out of control.

In response to the criticism, Solicitor General Jose Calida held a press conference on Monday at national police headquarters to insist on the legality of the police killings and to encourage more deaths of people suspected of being involved in the drug trade.

“To me, that is not enough,” Calida said of the killings so far.

“How many drug addicts or pushers are there in the Philippines? Our villages are almost saturated (with drugs).”

Duterte, who took office on June 30, has repeatedly warned that drastic action is needed to stop the Philippines from becoming a narco-state.

A lawyer and a former prosecutor, Duterte has urged law enforcers to kill those they believe are involved in the drug trade, as well as other criminals.

In one of the deadliest single incidents, police reported killing eight “drug personalities” during a pre-dawn raid on Saturday in a small southern town.

As in the other cases, police insisted they were forced to shoot after encountering resistance.
One of the nation’s top human rights lawyers, Jose Manuel Diokno, warned last week that Duterte had “spawned a nuclear explosion of violence that is spiralling out of control and creating a nation without judges”.

“Do we still probe and have a trial as part of due process? Useless, it seems to me,” Saguisag wrote in an online column last week.

Some opposition lawmakers have also called for a congressional investigation into the spate of killings.

Calida, a Duterte appointee, said he would protect police from or during congressional probes, while emphasising it was up to critics to prove allegations of abuse rather than base inquiries on speculation.

“I am here to encourage the (police) not to be afraid of any congressional or senate investigations. We will defend them … I am the defender of the (police),” he said.

Commercial Interior Fit out in Dubai

House and Lot for sale in Tagaytay City near Skyranch