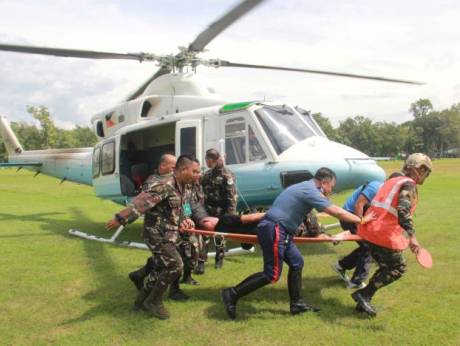 Seven members of president’s security team hurt a day ahead of his planned visit to an area gripped by intense fighting between militants and government troops.

Manila: A roadside bomb in the southern Philippines on Tuesday wounded seven members of the president’s security team, a day ahead of his planned visit to an area gripped by intense fighting between militants and government troops.

Rodrigo Duterte said he would defy his advisers and still go to Butig town on Wednesday to visit wounded soldiers, despite the bombing that hit his security staff and also wounded two soldiers.

“The truck carrying the president’s advance security detail was hit by an improvised explosive device,” Defence Secretary Delfin Lorenzana told reporters in Manila. “There was no firefight.”

The men injured in Lanao del Sur province were immediately airlifted to safety. Members of the president’s official media team were also in the convoy but were unharmed.

Some 40 militants from the Maute Group, which has pledged allegiance to Islamic State, have been killed during an air-and-ground assault on an old municipal building they have occupied since Saturday, said military spokesman Colonel Edgard Arevalo.

Twenty soldiers have been wounded in the fighting, which continued to rage on Tuesday.

The defense secretary said he would advise the president to cancel his visit.

“It’s still not under control,” Lorenzana said, adding the military was trying to validate links between local groups and Islamic State.

Duterte, known for ignoring his ministers and security experts, said he would still go and the situation was under control.

“The advice was to postpone. I said no, I will go there. And if possible, take the same route,” he said in a speech.

“Maybe we can have a little gunfight here, gunfight there.”

Police believe the Maute Group may also be responsible for the planting of a homemade bomb on Monday near the US embassy in Manila.

National police chief Ronald dela Rosa showed reporters a sketch of a suspect and appealed to the public to help identify and locate him.

Police said a man driving a taxi stopped near the embassy during the night and placed something in a trash bin. A street sweeper discovered the bomb, which police safely detonated.

Dela Rosa said the device had components similar to a Sept. 2 bomb in Duterte’s home city of Davao, which killed 14 people and wounded dozens. Authorities believe the Maute group was responsible.