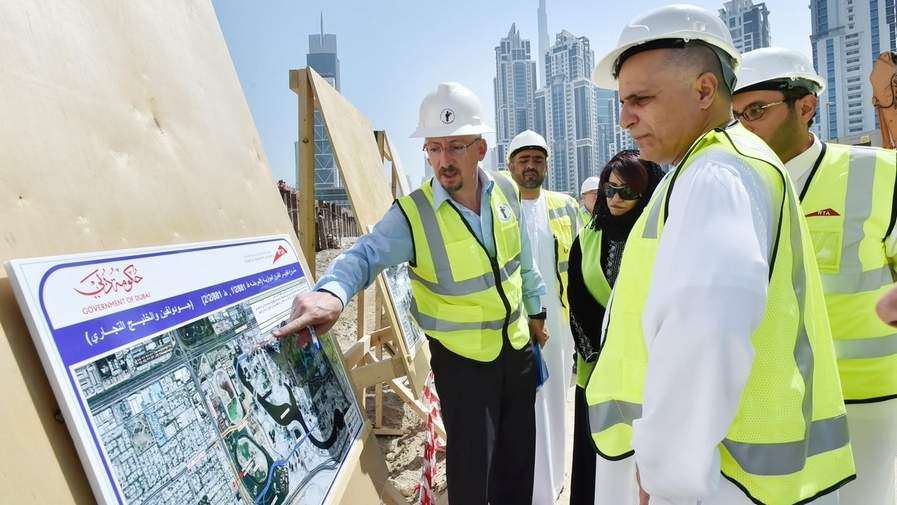 Roads and Transport Authority (RTA) has completed 85 per cent of Parallel Roads Improvement Project – Phase 1 (Godolphin District). The two bridges crossing over the Dubai Water Canal had been accomplished and all construction works under this Phase would be completed in the final quarter of 2017, said Mattar Al Tayer, Director-General and Chairman of the Board of Executive Directors of RTA.

Al Tayer undertook an inspection tour to take stock of the progress of the project, which comprises two phases costing about Dh1 billion.

“The objective of the project is to mitigate the traffic density on the Sheikh Zayed Road (between Interchange 1 and 2) by 15 per cent. It provides additional entry/exit points to the Business Bay and Burj Khalifa District with a capacity to handle 20,000 vehicles per hour in both directions. It would also step up the capacity of the Meydan Road, and cut down the journey time between the Sheikh Zayed Road and Al Khail Road from 12 minutes to about 2.5 minutes.”

He added, “It would also provide a ramp for Meydan Property Development Project, and ease the pressure on the Financial Centre Road. The project entails the construction of bridges extending 5,665 meters and underpasses running 2,445 meters.”

“Phase 1 of the Project, which costs about  Dh578 million, encompasses the construction of a 3.5 km-long flyover comprising 3 lanes in each direction crossing over the Dubai Water Canal. The number of lanes increases to 5 in each direction above Godolphin Stables and Al Meydan Road up to Al Quoz Industrial Area. It also includes upgrading the existing junction of Al Meydan Road and Al Khail Road where flyovers will be constructed to provide left turns and ease the existing overlapping of traffic movement, which would reduce the congestion at the junction during peak hours.”

In the second quarter of 2016, RTA started construction works in the Parallel Roads Project – Phase 2 at an estimated cost of Dh336 million. This Phase encompasses the improvement of the western part of the Parallel Roads between Al Meydan and the Financial Centre Roads across the Business Bay district. Lane capacity will range from 3 to 4 lanes in each direction, and service roads will be provided at both directions in most parts of the Project.

“The Project includes the construction of a 240-meter flyover at the intersection of Al Saada and Burj Khalifa Boulevard Roads, and a 535-meter tunnel at the intersection of Al Saada and Business Bay Roads. Works include a 500-meter bridge at the extension of Al Saada Road crossing over the Dubai Water Canal (completed with the opening of the Dubai Water Canal). It also includes the construction of a 420-meter bridge at the intersection of Al Meydan and First Al Khail Roads, a 420-meter tunnel to ensure leftward turn from Al Saada Road to Al Meydan Road, and a 340-meter underpass for horses crossing at Dubai Stables. The project works include improving and shifting utility lines as well as lighting and signage works. Works in Phase 2 of the project are set for completion in mid of 2018,” said Al Tayer.

“The Parallel Roads Project is one of the vital projects currently undertaken by the RTA to ease the congestion on Sheikh Zayed Road. This traffic corridor, which comprises 3 lanes in each direction, extends 108km from Sheikh Rashid Road in the north up to the entrance of Abu Dhabi. The project covers the construction of bridges and at-grade junctions at the intersections of parallel roads with the crossing roads extending 42km. The entire project constitutes a traffic hub supporting the Sheikh Zayed Road and Al Khail Road, and upon completion of all phases, it would ease the traffic movement in the area parallel to the Sheikh Zayed Road to the East,” added Al Tayer.