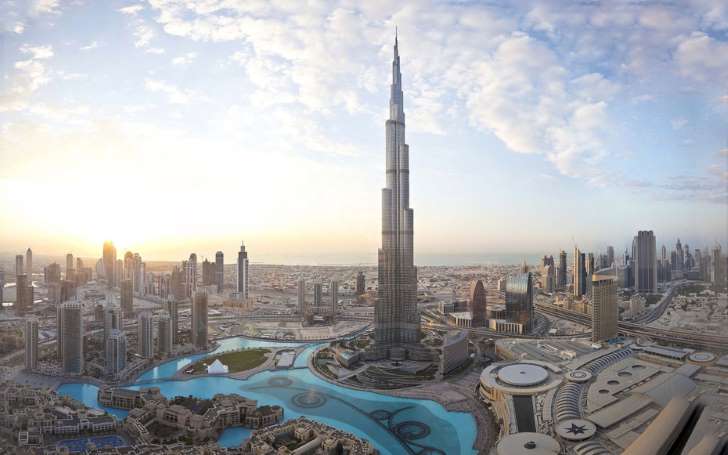 Dubai’s crowning attraction is visible from miles away: Burj Khalifa, the world’s tallest building, stands 160 stories above the ground, 950 feet higher than the World Trade Center in Manhattan. No matter where you are in Dubai, it’s hard to escape the gleaming, triple-sided steel-and-glass silhouette, looming over the city at night like a huge twinkling syringe.

The History of the Burj Khalifa

The needle-topped skyscraper first opened in 2010, though work on the project began much earlier, in 2004. A total of $1.5 billion was spent on construction, which might explain the rather lavish opening ceremony that first introduced Burj Khalifa to the world. On January 4, 2010, Sheikh Mohammed bin Rashid Al Maktoum presented the tower in all its glory, underscoring the important role it would play in developing the destination as a high-traffic tourist destination. To mark the occasion, there was a 10-minute fireworks display, launched off the building itself.

Unlike any skyscraper the world had seen before, Burj Khalifa was a truly collaborative undertaking, requiring some 12,000 construction workers per day, who logged a collective 22 million man hours. Its foundations plummet 141 feet below ground. To keep the glass looking spic and span, a total of 18 automated units are installed on tracks on the side of the building; it takes up to four months to clean all 24,000 windows.

But it’s not just window cleaners who perform daring feats on the planet’s tallest building. In 2010, during filming of Mission Impossible: Ghost Protocol, Tom Cruise and the entire crew flew to Dubai to create memorable scenes of Cruise hanging, Tarzan-style, from the top of the Burj Khalifa. Cruise famously films all his own stunts, and for this particular sequence, the actor was required to leap out of a window—a mile and a half above Dubai—and then scramble vertically up the side of the glass tower, all while strapped in to various ropes and harnesses.

Due to the height and material makeup (aluminum and stainless steel) of Burj Khalifa, it’s often susceptible to powerful jolts from lightning. Over the years, countless photographers and videographers have captured dramatic images of the tower in mid-strike—a spectacle more dazzling than any water fountain show or flashing billboard.

Though the skyscraper’s exotic location is a considerable hike for US travelers, its inspiration can be found much closer to home. The design is actually based on a flower called the Spider Lily (Hymenocallis), which is native to southern states like Georgia, Alabama and Arkansas, as well as parts of the Mexico and South America. The delicate, star-shaped blossom thrives in humid, swampy climates, and can even be found sprouting up in the river valleys of southern Missouri and Indiana—worlds away from the twinkling high rises of Dubai.

Bluechipgulf- Finest IT Support in Dubai