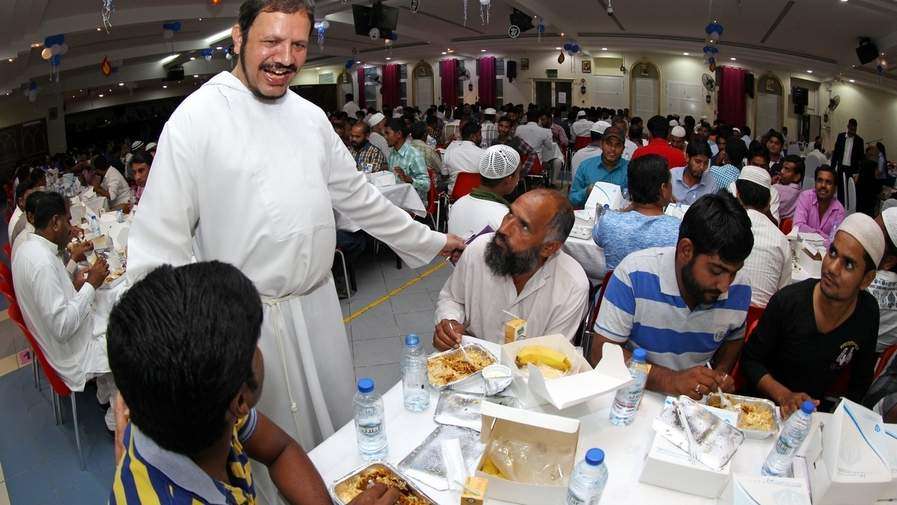 In an exemplary model of the UAE’s peace and harmony, Muslims and Christians gathered in Sharjah’s St. Michael Church on Wednesday to share lftar meals.
The church hosted Iftar for 400 Muslim workers who were served food by 200 catholic volunteers of various nationalities. This is the second year for the church to host Iftar for Muslim workers from various labour accommodations.
In a very spiritual moment, Azaan (call for prayer) was given inside the church where all Muslims offered their Maghrib prayers.
The Iftar was attended by Sheikh Fahim bin Sultan bin Khalid Al Qasimi, chairman of government relations of the Sharjah government, other officials and priests of the church.
Catholic priests praised the strategy of the UAE in spreading tolerance and initiating interfaith harmony.
Priest Wissam Al Massa’deh told Khaleej Times that it is the duty of the church to host such an Iftar. “This church is situated in the land of giving and goodness. So that is our duty to contribute to that great spirit of tolerance by hosting this Iftar for our Muslim brothers during the holy month of Ramadan. This initiative is in appreciation of the tolerance and brotherhood that prevail in the UAE, a country that respects and appreciate the dignity of humans.”
“We are so happy to welcome our Muslim brethren for Iftar, in a peaceful and harmonious atmosphere where two great faiths come together to share love, brotherhood and forgiveness.”
He said the initiative is also aimed at teaching the new generation to accept others, regardless of their religion, colour, ethnicity or class. “In the light of the current crisis in many countries around the world, we would like to organise more events of this kind to spread the spirit of tolerance, peace and forgiveness.”
He added that the church, with the help of 200 youth volunteers, launched an initiative to distribute Iftar meals to motorists and the needy every day near Sharjah Central Souq. “The Muslim brothers who received the meals were very happy to know that it was an initiative of the Catholic Church.”
Sheikh Fahim Al Qasimi told Khaleej Times that the event where Muslims and Christians shared meals and love indicated that the UAE is a role model of tolerance, especially when the Arab world is going through a crisis. “The UAE has succeeded in spreading the principles of tolerance, acceptance of others and forgiveness, the values that were practised by the late Sheikh Zayed bin Sultan Al Nahyan.”
Fahad Abdulllah Fahad, a Muslim worker at the Sharjah Municipality, said it is the first time for him to be inside a church. “I never had Iftar as a guest of another faith. It gives a great feeling of happiness to attend such an initiative. I really appreciate their kindness and hospitality.”
Another worker, Farman Barakat Ali, said that it was shocking to him when he was invited to have Iftar inside the church. “It was impressive to see the ‘azaan’ being given from the church. It is an amazing experience. The UAE is such great country that promotes tolerance and peace among different faiths.”
Rafeeque Khan, another worker, said he hoped that all other countries learned from the UAE. “I love this country so much because of its policy of acceptance of others. It is a great example of tolerance, peace and giving.”

BEDSPACE / PARTITION for Ladies Only

You can now Start your Business for only 18,000 AED