After ‘tanim bala’ scare, OTS to be abolished 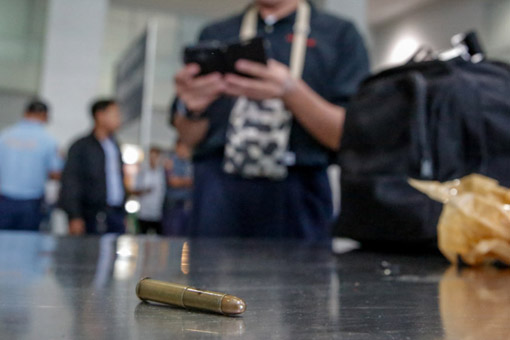 MANILA – The Manila International Airport Authority (MIAA) and the Civil Aviation Authority of the Philippines (CAAP) are taking over full supervision of all airport security screeners in the country.

MIAA General Manager Ed Monreal confirmed that effective immediately, all security screeners at all the terminals of Ninoy Aquino International Airport will now be under the MIAA.

The security screeners were once under the Office for Transportation Security (OTS), a line agency of the Department of Transportation.

The change in setup was made following a series of ”tanim bala” incidents at the country’s main gateway last year.

Several OTS personnel had been blamed for the series of tanim bala extortions in various airports.

OTS security screeners deployed in provincial airports, on the other hand, will now be under the direct supervision of CAAP.

CAAP is managing and operating more than 80 airports nationwide.

MIAA and CAAP are both line agencies under the transportation department, now headed by Arthur Tugade.

Monreal said all airport security screeners have been undergoing profiling and background check since he assumed office last July 1.

“We have to make sure that only the deserving and dedicated security screeners will be allowed to work at our airport to ensure that the riding public are protected from various modus operandi,” Monreal said.

He said the transition of command and responsibility will be formalized through an executive order by President Rodrigo Duterte.

“CAAP was informed to supervise all security screeners in provincial airports but since OTS is an agency created by law, we still need a written order for the full transfer,” Apolonio said.

OTS had earlier promised to investigate the alleged involvement of its personnel in the extortion activities but no result has been released so far.

Monreal and Apolonio said the transition of airport screeners will take full effect in January 2017, when both CAAP and MIAA get their budget allocation.