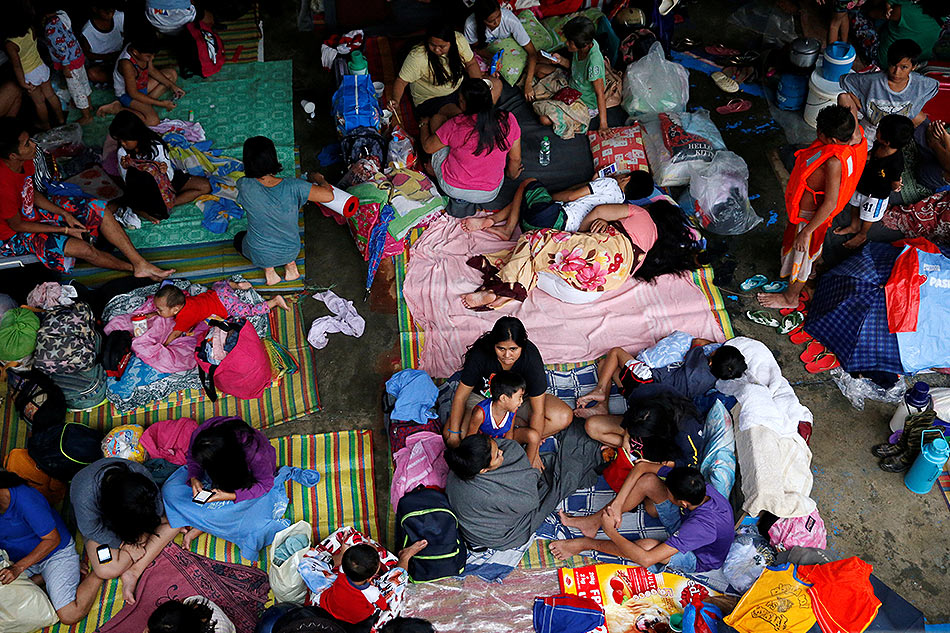 Residents take shelter at a covered basketball court after their homes were destroyed by floods that was brought by monsoon rains in San Mateo, Rizal. Erik de Castro, Reuters

Some 3,300 people were to spend the night on straw mats in eight evacuation centers in Bagong Silangan village in Quezon City. Dozens others fled to covered courts in San Mateo town in Rizal province.

Authorities warned of flooding in the capital and surrounding suburbs after several days of heavy rains pushed the La Mesa Dam close to overflow level. All eight floodgates at the Marikina river were also opened.

In neighboring Bulacan province, residents of Calumpit and Hagonoy towns were alerted for possible evacuation after the Ipo Dam opened at least one gate. 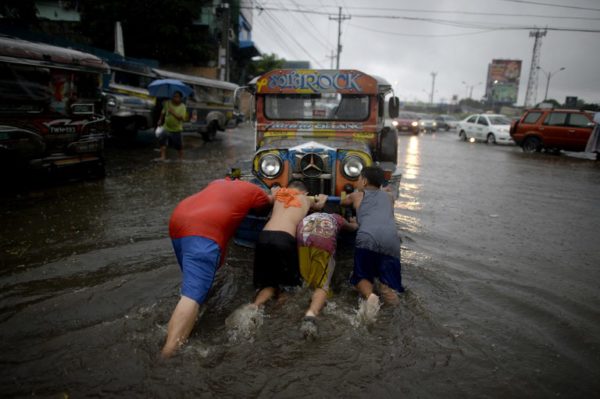 People push a “jeepney” out of a flooded street in Manila on August 13, 2016.
Floods inundated major thoroughfares in the capital late on August 12, after heavy rains brought about by southwest moonson, authorities said on August 13. / AFP PHOTO / NOEL CELIS

A tropical storm and a weather system east of Luzon will not hit land but will stir the southwest monsoon, bringing rains to large portions of the country for the next three to five days, the state weather bureau said.

Referring to the two weather systems east of Luzon, Aurelio said: “Sila yung parang magnet. Pag may LPA dito, parang magnet automatic itong habagat ay pupunta sa atin [They act like magnets. If there is a low pressure area, it acts like a magnet and the monsoon goes towards our direction],” he said.

The La Mesa Dam was just 0.11 meter below its overflow level of 80.05 meters and an evacuation order was issued as early as 11 a.m., PAGASA hydrologist Sonia Serrano told DZMM.

The Ipo Dam in Bulacan opened one gate at 1:30 p.m. and aside from Calumpit and Hagonoy along the mouth of Manila Bay, floods could also affect Norzagaray, Angat, San Rafael, Bustos, Baliwag, and Plaridel, Serrano said.

SVAP Infotech Pvt Ltd – is a Mobile, Web & IT Solutions

Rent LED TV for Trade Show or Conferences in Dubai

HOW CAN UBER CLONE BE BENEFICIAL?