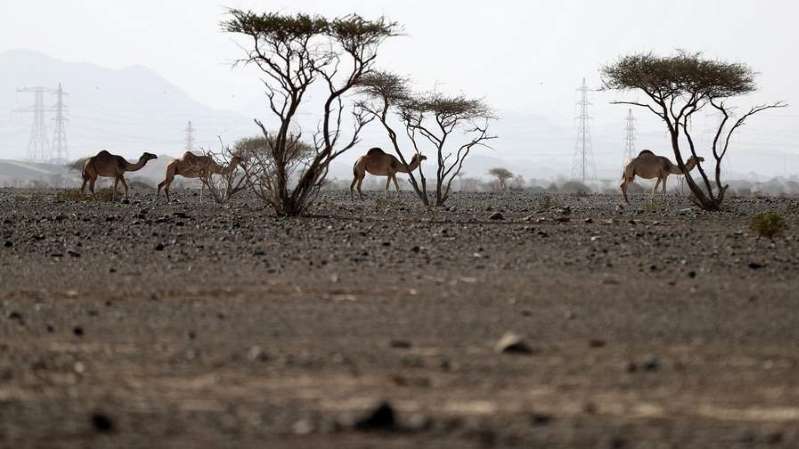 As part of its efforts to attain food security, the UAE is seeking new technologies that can withstand its fierce climate, water scarcity and soil salinity, and produce local crops with least amount of water.
With the UAE currently importing 80 per cent of its food supplies, the country aims to produce 60 per cent more food to feed a global population of nine billion people within the next 33 years.
The country has been establishing international partnerships to help produce crops and last week, Mawarid Holding signed an agreement with Chinese Chongqing Earthskin Eco-technology to implement desert soilisation technologies in different parts of Al Ain desert.
Under the agreement, both parties will test different technologies in one or more sites from the existing desert lands to plant 10 square kilometres of grass, trees or vegetables in the first year of cooperation.
Speaking to Khaleej Times, Dr Thani Ahmed Al Zeyoudi, Minister of Climate Change and Environment, said the project aims to try new technologies that would fit the UAE’s climate while reducing the water consumption. The ministry’s target is to diversify food and increase local food production.
“We will try different types of water including groundwater, diluted water and treated water. We will compare our results before taking the next decision in the next phase,” he said.
The project will go into three phases where a plan will be put out in cooperation with local authorities. As a beginning, 10 square kilometres will be allotted for farming in the next two-three years and will be expanded later on a commercial scale once the project is successful.
On a private project, another team of Chinese scientists have already started harvesting rice in diluted sea-water in aims to cover around 10 per cent of the UAE with paddy fields – although details as to how this will be achieved have yet to be disclosed.
An agreement was also signed to promote seawater rice across the Arab world to reduce the risk of food shortage in the future.
Al Zeyoudi said the ministry encourages different types of planting technologies, with vertical farming becoming the most common in reducing water as much as possible.
“Greenhouses are becoming costly, which is why people generally avoid it,” he said, noting that big farms in Abu Dhabi and the northern emirates are committing to using net farming to reduce temperature and water consumption.
“Diversity in technologies helps, so if a problem ever occurred, it won’t destroy all of the crops. It will give the chance to plant the other supplies with different technologies,” said Al Zeyoudi.
CQ Earthskin may set up an application research centre of desert soilisation technologies in Abu Dhabi to analyse the process of the desert soilisation or carry out other research on the application of desert soilisation technologies.
AI is the future

Mariam bint Mohammed Almheiri, Minister of State for Food Security, told Khaleej Times that leadership has mandated the ministry to expedite Agricultural Technology [AgTech] enabled transformation in the UAE, and produce more with less.
“Artificial intelligence (AI), data storage and sensors in closed farms are few examples of how technology can be incorporated into controlled environment agriculture (CEA),” she said.
The CEA will help reduce water consumption by over 90 per cent. She added that the sector is now seeing more IT practitioners involved in agriculture than there are farmers, which makes this industry more attractive to younger generations.
In case of emergencies, the UAE is currently safe in terms of food supplies for six month, but ministers say they are working harder to guarantee longer periods of food security.
By 2030, global food demand is predicted to increase by 50 per cent, putting pressure on governments to find a solution that provides food security. Meanwhile, the number of malnourished people in the world has grown from 777 million in 2015 to 815 million in 2016.
This will be tackled in the National Strategy for Future Food Security, which is set to be announced in September 2018.
Almheiri noted the active involvement of the government, private sector and global companies, in AgTech inventions in the industry to tackle many of the issues faced today, with many pioneers showing interest in relocating to the UAE.
Advanced technologies, she said, will allow the country to manage and produce high-quality goods locally and with higher efficiency. “This brings us another step forward in improving this sector: We can have fresh, better-tasting and healthier food, with no pesticides or bacteria, ensuring a secure future for the food industry in the UAE.”
She noted that the ministry will launch a summer initiative called ‘Agcelerators’ to help establish an ecosystem that accelerates the process of shaping the future of agriculture regionally and globally. The initiative will be for entrepreneurs, technology enthusiasts, financiers and investors, to resolve challenges through pragmatic interventions.
First vertical farming venture successful

Last March, the first vertical indoor farm in the GCC region – Badia Farm – was launched in Al Quoz using the latest hydroponics and vertical farming technologies.
The farm now produces nutritious and pesticide-free leafy greens without the need for sunlight, soil or chemicals. It provides an extensive range of micro-greens including arugula, kale, radish, red cabbage, basils, and mustard to several restaurants and hotels in the UAE.
Omar Al Jundi, founder and CEO at Badia Farms, said vertical farming solves the challenges of water, climate and soil. “We are growing plants in a natural environment that controls temperature and humidity, without using pesticides.”
He added that such type of farming allows the re-use of water up to 9-10 times, using 90 per cent less water than open field farming.
The farm is operated by LEDs to replace the sunlight in a closed environment. With introducing new technologies in agriculture, farms will not only plant food in sustainable way, but is also producing new flavors to the market throughout the year. “Modern farming is the solution for this region, and we expect much more to emerge in the coming years.”
They key, he said, is educating people about the technology.

Room and Partition for kabayan in AL NAHDA SHARJAH

Kayan Services – for IT