Woman hopes UAE amnesty will allow her to attend her wedding 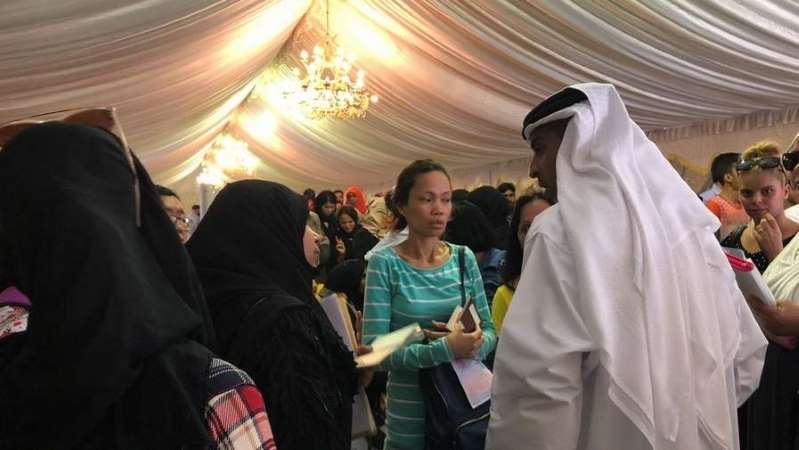 Thirty-year-old Maricar Peralta has her marriage fixed for August 5 in her hometown in the Philippines. She was among the first to approach the Abu Dhabi centre of the General Directorate of Residency and Foreigners Affairs to avail of the amnesty programme announced by the UAE government. Peralta entered the UAE on a housemaid visa and has been staying in the UAE illegally for more than four months.
“I want to exit the country as early as possible. I have already booked my ticket for tonight. My marriage is fixed on August 5, and I have to be home,” said the single mother whose daughter is in Philippines.
There were tears of relief, happiness and confusion on the first day of Amnesty as hundreds of residents thronged the immigration centre at Shahama in Abu Dhabi to rectify their visa status.
From morning 8am onwards, there was a steady stream of people – pregnant women, young mothers, families, old men on wheelchairs – of all nationalities who took their seat inside the air-conditioned tent set up at the Immigration centre’s compound on the outskirts of Abu Dhabi city.
Dozens of taxis and special buses brought people in hordes while many expats took public buses to reach the centre to avail of the three-month amnesty declared by the government.
Pakistani expat Shafat said he came to the centre at 7.30am.
“I wanted to beat the queue,” said Shafat, whose visa expired four years ago. “I no more want to live in this country as an illegal. I have been doing odd jobs but there was always the risk of getting arrested. Amnesty is a chance for people like me to return home safely,” said Shafat.
Sixty-year old wheelchair-bound Zahir Janan was brought to the amnesty centre by his nephew, who is working in Abu Dhabi.
“I want to go home now and be with my family,” said Janan, who was working as a carpenter. He said his visa expired two years ago.
The first day of amnesty was also marked with some confusion on how people falling under different violations and visa status could apply for amnesty.
Nenita Delaceina, a Filipna expat, and her three friends were waiting outside the gate not sure how to proceed.
“All of us want to apply for a six-month jobseeker residency permit and stay in the UAE. We are hopeful of finding a job. But we do not know what exactly are the proceedings,” said Delaceina.
But Immigration officials could be seen mingling with people, giving instructions and guiding them to different counters.
“Those who have Emirates IDs and passports, please go to the typing centre and fill up the application paper. Then come back. Others please sit down,” Sultan Ali Qubaisi, an immigration official, told the crowd waiting inside the tent.
Cartons of bottled water were also stacked up in the tent, and by midday, an official was distributing the water to the waiting crowd.
Positive response
Brigadier-General Saeed Salam Al Shamsi, director of the GDRFA in Abu Dhabi who visited the tent in the morning, said the response on the first day was ‘positive.’
“We do not know the exact number of people who will turn up on the first day. But looking at the volume of people who has come in, It looks positive,” Al Shamsi told the media.
Explaining the procedure to apply for amnesty, Al Shamsi said those who have their Emirates ID should first go to a typing centre and fill up the application and submit it at the immigration for applying for exit pass. Once application is submitted, it will take up to two days to get the exit pass.
“Those who do not have valid documents should first proceed to take their biometrics and then get the application typed,” said the official.
Those who want to apply for a six-month temporary visa can also straight come to the immigration centre in Shahama.
Thee other two amnesty centres in Abu Dhabi are located in Al Ain and Al Garbia.
“Those who wish to apply for jobs should register themselves in the ‘virtual job souq’ on the website of the Ministry of Human Resources and Emiratization and find a new sponsor.”
“This is the Year of Zayed and we are pleased to be helping people with visa issues and those who want to legalise their status,” said the officer.
“We are well-prepared and ready to handle all illegal residents who will come to the centre.”
He said the amnesty registration centre will operate from Sunday to Monday, from 8am to 8pm and will handle all kinds of cases related to residency violation.
“All illegal residents should come forward and make use of this amnesty initiative to rectify their status or leave the country without facing legal prosecution,” said Al Shamsi.

Tire.ae – a tire distributor in UAE